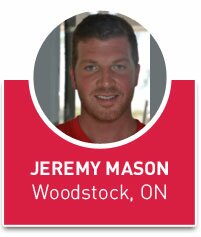 I’m riding this year in loving memory of Nicholas Theodore Van Dyk. Nick was a wonderful, kind, and very positive young man who I am privileged to have known for his entire life. Along with his brother Josh and sister Laura and my sister Sam we all grew up as children on the same street, houses right across from one another, with the same familiar cast of neighbours and friends (and neighbourhood pets too). For us boys, we were all like brothers, we stuck together and explored the world from our eyes in our little corner of Woodstock, Ontario that we all called home. Within those confines we played, battled and competed with each other at everything and anything at all, you name it: road hockey, pond hockey, mini sticks, basketball, baseball, frisbee, ping pong, biking, rollerblading, original gaming systems, canoeing, fishing, archery, golf,.. we had it out at them all. We were fortunate and I’m sure at the time we didn’t even know how good we had it just to have each other. It was a really wholesome and stable environment that we lived in relatively unchanged for about 21 blessed years and for those years I am eternally grateful.

Nick got diagnosed with cancer in the winter of 2007 during his freshman year at Nipissing University, at a time when his life was really beginning to blossom and those of us close to him for a long time could all see what a really fine gentleman he had grown into. Nick would’ve given anything of himself to help others, he never complained outwardly and he took his diagnosis with humility, courage and most of all a concern for everyone else but himself. He didn’t want others to worry about him, and he hid it well. I can’t imagine his bravery, he just wanted to continue living his normal life, as if the illness was merely an afterthought. His attitude was something I will always admire and try to embody in my own life. Those who did not have the fortune to have known him can simply read his response he wrote in a letter of thanks for the support he received following his diagnosis in which he humbly accepts his condition if it can somehow prevent other children from the throes of youth cancer then his outcome would be somehow worthwhile.

Last year, Josh took upon himself to ride across the country for the Sears National Kids Cancer Ride in his honour and I had the incredible fortune to be there with him as a volunteer. One of the most remarkable stories I witnessed across the entire breathtaking 7’000 kms we crossed on our journey was one that was closest to home. The Van Dyks have been neighbors, friends and family to me my entire life so I shouldve know yet still was blown away by when actually experiencing their demonstration of support for each other and the Sears National Kids Cancer Ride right from the get-go. Nick truly has a living legacy, and it’s only gaining steam.

Each and every year since Nick passed away they have sponsored a National Rider. They have helped fundraise by, and among other means, hosting two annual Ring-Toss events: one in Woodstock, ON and one in Seaforth, ON and have raised over $150’000 to date. Josh raised $42’000 last year alone. Nick’s legacy continues to grow, he was a selfless kid who we all loved and cherished and miss deeply, and nothing can replace that. But to think of all the good being done in his honor and memory is truly mind blowing and he certainly continues to positively affect the future of kids thrust into his unfortunate circumstance and he is what brought us all here to begin with. It was such a humbling and eye opening experience and I am so privileged to ride this year for Nick, and for all the children whose path we’ve come across in trying to fulfill Nick’s wish and their stories have added to the desire to reach our destination – beyond cancer!

The 100% model on which the Coast-to-Coast Against Cancer foundation is  based on means where every single penny is raised it goes directly and entirely to increasing survivability, improving life outcomes and support for research and development and access to high quality pediatric oncology centres across the country.  This is made possible by a broad range of sponsors, they have been vital to the possibility of fundraising events such as these and without them it would not be possible, period.