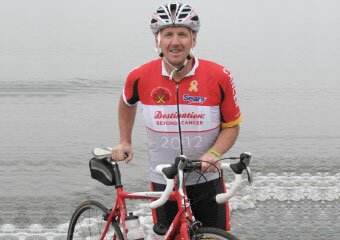 Dedicated to “Miles 4 Michael” and finding a cure!

In September of 2015, I will again be participating in The Sears National Kids Cancer Ride, to raise money for Childhood Cancer Research. Many people are wondering why am I doing this a third time and why in Canada. First the “why I am riding again”

On October 21st of 2004 my life was normal, just one day later a phone call from the doctor changed everything. I was told my oldest son Michael had mass in his abdomen and few days later it was confirmed that he had primary liver cancer. How could this be, he was seventeen, finishing his senior year in high school, had been accepted to college and looking forward to life.

After being told about his cancer, Michael started chemo and in February of 2005 had half his liver removed along with lymph nodes in his abdomen and chest area. After the surgery at UPMC, Michael spent two weeks in the hospital recovering and was ready to live life again, back to the life he knew before, the cancer we thought was gone. Michael’s life for a few months was “normal”. He went to school, went fishing with his friends, went to the Prom, Graduated from Williams Valley High School and was ready for college. Things changed just a few days before he started college. On a routine visit and a scan to make sure things ok, the cancer was back.

After over a year of trial medicines and my son pretending everything was fine, the cancer took its toll. October of 2006, Michael again in the hospital, I sat there as the doctor visited him and he asked” how long do I have to live”. The doctor setback by his question answered this brave young man and said maybe a month or a month and a half. Now at nineteen, my son called his friends to the hospital told them the news. On November 13th of 2006, the cancer won the battle with my son. It shortened his life but it did not change the way he lived it.

Now as many people have asked “Why Canada”.   When I participated in my first Tour for Kids, I met several people with stories like mine, we belonged to a club, no one wants to join, and you don’t invite anyone into “We lost a child to cancer”. Over the years of five Tour for Kids and two National Rides, I met many others that belong to that club. The pain or tears were no different than mine. The loss of the child felt them as empty as I felt.

There were no borders separating us, just one common cause and that was to find a cure for Childhood Cancer so that other parents, do not have the pain, sorrow and emptiness that we do through the loss of a child from cancer. The answer to “Why in Canada” is plain and simple, I am riding for Childhood Cancer.