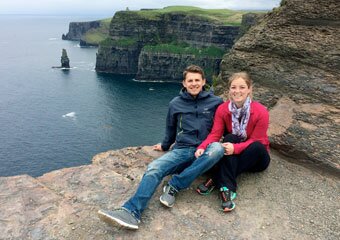 I ride for the kids who wake up every morning in hospitals across the country praying for a cure. I ride for the parents who fight for days, months and even years with their children in hopes of becoming cancer free. I ride for the families who have lost a child to cancer. I ride to bring awareness to communities across Canada. As the first Newfoundland rider to be a part of the Sears National Kids Cancer Ride, I am riding on behalf of the province of Newfoundland.

Being from Newfoundland I had never heard of the Sears National Kids Cancer Ride. We are a little out of the way here in Newfoundland and the ride ends in Halifax. I first learned of the ride from my girlfriend. Unfortunately, she lost her brother to a rare form of childhood cancer and since then her family have been big supporters of the ride. Although, I wasn’t fortunate enough to have met her brother, Nicholas Van Dyk, I can truly appreciate the type of person he was. While visiting her family this past summer I was reading through a memory book of Nicholas when I stumbled upon a letter he had written before he passed away. The letter was a thank you letter to his family and friends who had supported him. In his letter he described how thankful and lucky he was to have lived the life he had and how he wouldn’t change a single thing. He spoke of family vacations, stories that would make you laugh out loud and big moments that occurred in his life.

Throughout the whole letter he did not mention cancer once or say anything about his treatments. To this day I still can’t comprehend how anyone can be that strong and positive. I had heard many stories of Nicholas but at that point in time I truly knew what type of person he was and I decided I wanted to ride. In 2016 I will ride for Nicholas Van Dyk.

I have been very fortunate to have the type of family I have. I was able to grow up with my siblings and be a part of their lives. I have four wonderful nephews who mean the world to me and I can’t imagine life without them. Every family should have that same opportunity and no family should ever have to hear the words ‘your child has cancer.’ The goal of this ride is a destination beyond cancer and to spread awareness across the country. Help support these children and families by donating to the Sears National Kids Cancer Ride. 100% of your donation will go directly to programs and research to support children living with and beyond cancer.

In September 2016, I will be riding in memory of my brother, Nicholas Van Dyk, and all the children and families who have been affected by childhood cancer in the hopes that someday this disease will not exist.

Although my family’s life had changed drastically after Nick passed away in 2008 and it was difficult to move forward, we found great strength in the love and support provided by our family and friends around us. They reminded us of the great person he was, as he had the ability to brighten someone’s day with a simple smile, funny comment, or just being present in the moment. Nick would never pass up an opportunity to play catch in the back yard, race you across the lake in a kayak, sing loudly in the car, or body check you or your friends into a snow bank while playing pond hockey behind our house. Nick lived every day to the fullest; he always had time to spend with you, and never took life too seriously. Although the second child in our family, he was fearless as you could count on him to try anything you were too afraid to do yourself. Even in his last few weeks, I had the pleasure of watching him slalom on one waterski and ‘attempt’ barefoot water-skiing while camping at Rondeau. While bike riding, he would rub his front tire against yours to see how often he could make you fall. We would laugh until my stomach hurt as he always found humor in life no matter what cards he had been dealt. Although Nick’s life was short, he travelled to many great places, inspired others to enjoy the simple things in life and blessed the people around him with kindness, positivity, and laughter.

The year following Nick’s passing, a family friend (Sharon Poole) had contacted us about the SNKCR as she wanted to ride in his memory and raise money for childhood cancer. Since then, our family became dedicated to this cause and created an annual Texas Horseshoe (Ring Toss) Tournament to support it. This day involves family and friends getting together to enjoy friendly competition and raise funds towards childhood cancer.

In 2013, my oldest brother Josh had the courage to do the SNKCR followed by Jeremy Mason, a family friend, who was inspired to do the same in 2014. This is now my chance to ride across Canada in Nick’s memory and shed positive light and hope on those who have been affected by this disease. The challenges and pain that I will endure on this ride will be miniscule to the struggles that children living with cancer face. I am honoured and thrilled to be a part of this ride to create a someday where no child will have to experience these hardships. Thank you for your support and please know that any donation will help towards improving the quality of life for children, and their families, living with and beyond cancer.

Meet our National Riders! Read the Riders Blogs! Follow the Route Our 2016 Photo Albums Thank our Sponsors! Follow us in Real Time! In the Media